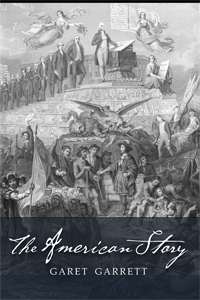 Garet Garrett's last book was his own retelling of American history, with a special focus on the technologies and people behind them that transformed life for average people, along with a relentless and truth-telling story about the rise of the state.

These had been a theme of all of his work, from his novels of the 1920s to his case against the New Deal in the 1930s. His final work tells the story of the American people as its never been told, from an early experiment in freedom, and the fight against the powers in Washington that sought to suppress that freedom, all the way through the beginnings of a preventable Cold War.

The images that the author presses on the mind in The American Story--a complete biography of a country--are vivid and telling, the product of a lifetime of study and the wisdom of age.

The Wall Street Journal called this book "probably the most brilliant long historical essay on America that has ever been written."