The Costs Of War 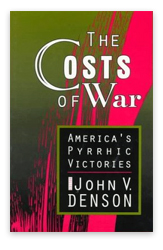 This book is one of the most significant ever written by Denson. It contains essays that have been turned into major movies and documentaries, and influenced politics in ways no one could have expected. The thesis in brief: the warfare stat is as great or greater threat to liberty than the welfare state. Lovers of freedom need to focus their energies in favor of peace and against war.

Further, there can be no reconciling freedom and empire.

The 2nd edition is expanded to include an additional essay on World War I by Ralph Raico and another by David Gordon on war propaganda. Other contributors include Murray N. Rothbard and Robert Higgs.

"An original and scholarly appraisal of America's wars and their consequences, The Costs of War is easily one of the most important books to emerge from American conservatives in a generation...." Thomas Woods, Modern Age....