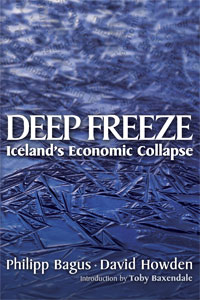 It was a modern thriving economy one day, and then, suddenly, the food disappeared from the shelves, the banks closed, and the ships stopped arriving. Iceland in 2008 experienced an unprecedented economic meltdown that struck fear in the hearts of people all over the world. If it could happen here, it could happen anywhere.

The economic crisis led to a political crises, with resignations galore. The whining and wailing about the disaster continues to this day, with most commentators blaming deregulation and the free market.

In Deep Freeze, economists Philipp Bagus and David Howden demonstrate that the real cause of the calamity was bad central bank policy. Rates were way too low, banks were too big to fail, housing was implicitly guaranteed, and banks were borrowing short term from abroad to finance long term bonds.

The authors discuss the implications of this maturity mismatching and zero in on the central bank policies that encouraged unsound practices. They demonstrate the cause and effect without a shadow of a doubt, using vast amounts of data and a detailed sector-by-sector look at the economy of Iceland...