Innerland: A Guide into the Heart of the Gospel 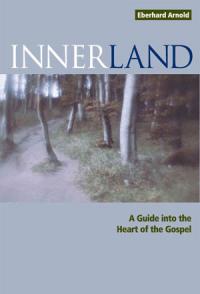 It is hard to exaggerate the significance of Innerland, either for Eberhard Arnold or his readers. It absorbed his energies off and on for most of his adult life – from World War I, when he published the first chapter under the title War: A Call to Inwardness, to 1935, the last year of his life. The fruit of this long labor of love was not only a book, but a wellspring of remarkable depth.

Packed in metal boxes and buried at night for safekeeping from the Nazis, who raided the author’s study a year before his death (and again a year after it), Innerland was not openly critical of Hitler’s regime. Nevertheless, it attacked the spirits that animated German society: its murderous strains of racism and bigotry, its heady nationalistic fervor, its mindless mass hysteria, and its vulgar materialism. In this sense Innerland stands as starkly opposed to the zeitgeist of our own day as to that of the author’s.