Pearl Harbor: The Seeds and Fruits of Infamy 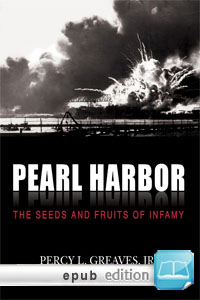 A president faced an economic depression that wouldn't go away, and a deeply disgruntled electorate. Not for the first or last time, the option of entering a war seemed politically appealing. How badly did FDR want a war and to what lengths was he willing to go to get one? The questions have vexed historians for many decades.

Pearl Harbor: The Seeds and Fruits of Infamy by Percy Greaves, Jr. (1906-1984), published for the first time in 2010, blows the top off a 70-year cover-up, reporting for the first time on long-suppressed interviews, documents, and corroborated evidence.

The first section (the seeds) provides a detailed history of pre-war U.S.-Japan relations, thoroughly documenting the sources of rising tension. The second section (the fruits) shows that the attack on December 7, 1941 was neither unexpected nor unprovoked.